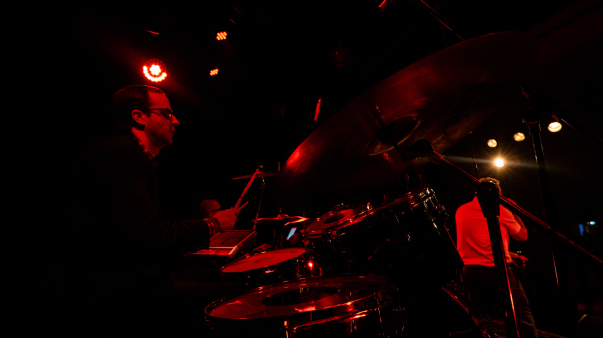 Born in South Wales, Tom has been playing drums for seventeen years. From the first time he picked up a pair of sticks at the age of sixteen, Tom has been constantly improving his abilities, and establishing himself as a competent and professional musician. He is capable of stepping into any musical situation and providing exactly what people require from a professional drummer. He is also very comfortable working alongside other professional musicians, both live and in the studio. Tom is an expert rock player, but he can also play a wide range of different styles, such as jazz, funk, blues, reggae, ska, Latin, R n’B and pop, to an excellent standard.

He has worked with many different bands/artists across these different music genres, and performed at some of the biggest music venues and festivals in the UK, including Brangwyn Hall in Swansea, Newport Centre and Indigo2 at the O2 as well as Islington Assembly Hall in London. He has supported many well-known bands and artists on the live stage, including The Pineapple Thief, From The Jam, The Selecter, Bad Manners, The Aristocrats, Simon Townsend and The Alarm, along with well-known drummers at clinics. He has toured all over Europe and has performed in Germany, Holland, Switzerland, Czech Republic, Slovakia, Hungary, Poland, France and Italy. He has also had the opportunity to be involved in battle of the bands competitions, music video shoots and the London International Music Show. He has also performed on a programme for the Welsh television station 'Made in Cardiff TV' as well as live on BBC Radio Wales.

Tom has also recorded with many different bands/artists and worked with renowned producers, such as James Loughrey (Skindred, Def Leppard) and George Shilling (Ocean Colour Scene, Porcupine Tree). Some of his fine work has been released on independent record labels, and he is currently signed with Kscope records (the same label as Steven Wilson, The Pineapple Thief, Anathema, Tesseract and more). He has also recorded in some of the UK’s best studios, including Metropolis Studios in London and Monnow Valley Studios in South Wales.

Tom studied music in Europe’s leading school of contemporary music, the ICMP in London, with some of the country’s best drum tutors. He won the Roland Partial Scholarship award in 2005 to study there, and he passed the Diploma in Popular Music Performance with Merit in 2007. He was also awarded the prize of "Most Improved Drummer" at the graduation ceremony. In 2010, he was awarded a 2:1 in his Bmus Degree in Popular Music Performance, and he passed a RockSchool LRSL Music teaching diploma at Level 6. He also had the opportunity to teach alongside members of the ICMP faculty, including Andy Saphir (Michael Twitty) and Jay Stapley (Roger Waters).

After finishing his studies and returning home to Wales Tom began working as a private drum tutor, conducting private lessons with students of all ages and also teaching at local primary and secondary schools. The percentage of students under Tom’s tutelage who decide to sit a RockSchool Grade exam and receive a Pass mark or greater is 100%. Tom is also a member of the Musician's Union, and has certificates from Child Protection and Health and Safety seminars run by the Union. He also has a Public Liability Certificate from the Union.

Tom also plays many percussion instruments to a high standard, such as congas, bongos, timbales, tambourine, shakers, surdo e.t.c. He can use electronic drums and samples to great effect in his performances, and he is familiar with using backing tracks live on stage as well as playing to a click in the studio. Tom can also read music, and can sight read drum music to an excellent standard. Tom is available for gigs, tours and sessions as both a drummer and percussionist. He is also available for private lessons in both drums and percussion.

These are just some of the bands/artists Tom has worked with: